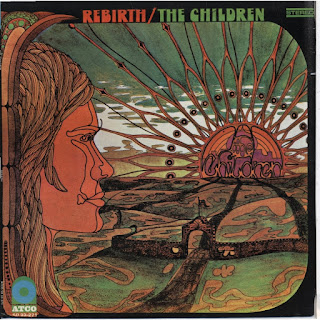 What do we get here?  We get a very groovy sunshine pop disc and the story behind it.  The Children is a cosmic collision between a couple of West Texas acid rock bands, The Stoics and The Argyles.  This particular compilation bring you the garage stomping sound of both, an intermediary of The Mind's Eye, and the walking through the flowers, tripping out on Donovan and the Zombies vibrations of the titular band here.

Let's cut straight to the marrow.  I dig the two tunes by The Stoics.  They have a wildly spiraling, scream and guitar shout that compares to nothing else but fellow Texans, the 13th Floor Elevators.  The Argyles comparatively suck, frat rocking like the Kingsmen and the Trashmen.  It's not the worst pedigree, but Roky Erickson of the Elevators may not approve (or not!).  So then there is the main event.  After the psychedelically violent kick in that spot between your brows of the Stoics and somewhat of the Argyles and the Mind's Eye, you are now tripping in a meadow of fairies with Children.  It's not bad, but it is a shock.  Isolated on it's own, you are now looking at a Sgt. Pepper reflected surface that flows through California syrup and strings - the hybrid band had in fact relocated to that state.  "I Got Involved" probably perverts the twee side of the Kinks a bit too much, but most of the other tracks give you a finger-picked pattern of laid back psychedelic grooviness.  "Pictoral" ups the stakes a bit, but it is still dreamy and doesn't plow the icepick in your head the way those first couple Stoic tracks do.

You don't just get an album here, you get a little aural biopic.  Children are pretty groovy on their own, and will appeal to those of you with sunshine ears and baroque thoughts.  But dammit!  Those first few tracks!  It's a tease that I would love to fall deeper into.  But y'know, we get what we get with this reality in the end.  This may well appeal to your reality.
Posted by Dr. Schluss at 11:40 PM