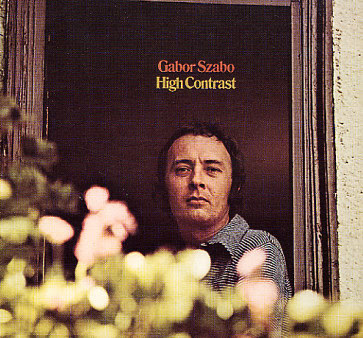 If you are a psychedelic soul who grooves on the sounds of David Axelrod or the jazzier moments of the Dead or the Allman Brothers, this is actually something you want to hear.  It's all in the marketing.  You look at the cover, run a basic scan on the history, and you're looking at early fusion/smooth jazz romp.  But take the sounds themselves, and you're on a magic carpet, wafting through the L.A. haze with the Dude alongside.
Posted by Dr. Schluss at 10:11 AM

If you like this you should check out his other "psychedelic" albums: "Jazz Raga"(1967),"Dreams"(1969), the seriously psychedelic "Wind Sky And Diamonds"(got great versions of White Rabbit & LSD on it), "Mizrab" etc
Jazz Raga: https://youtu.be/E8e1iFFtEgM
Wind Sky And Diamonds: https://youtu.be/DNJ95ZDCi0w
Bob Thiele/Gabor Szabo - Light My Fire (1967): http:// .blogspot.co.uk/2015/02/bob-thiele-gabor-szabo-light-my-fire.html

Thank Doc for this prescription "!

His record," Gypsy 66 " was a huge influence on guitar players in the 60's, who wanted to improvise melodically. It was definitely an album Garcia, Santana & Cippolina would have heard and been very familiar with,

Thanks for sharing this Dr. S! I really really dig Gabor Szabo's playing. And this is one of my longtime fave "chill" albums, it's got such a great mood.

My only frustration w Szabo that he made too many lps with cheesy, pseudo-psychedelic trappings in the late 60s. Oh, and he died way too young. Bummer.

I really enjoy his earlier works with Chico Hamilton's group (Lady Gabor is a supremely psychedelic tune) and his early solo stuff like Spellbinder & The Sorcerer.

Following High Contrast, "Small World" is excellent. Side A of "Mizrab" with Thirteen & the title track is stellar. If you can find the two '74 Live albums ("Jazzpodium" and "Live w Charles Lloyd") they'really good. And "Belsta River" is a fantastic final lp.

There's a Szabo live record from 67, "The Sorcerer", that is very much of the time. I think it was recorded at the Jazz Workshop, with crowd noise and clinking glasses left intact, providing an atmosphere that makes for a "you are there" kind of vibe. My favorite of his.

the zippy share file has expired . any other suggestions ?