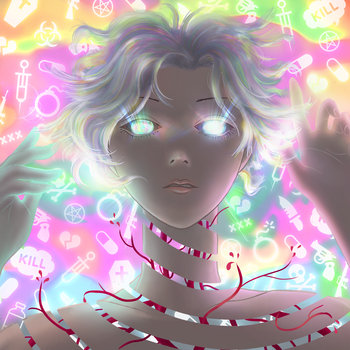 When I was a five-year old psychedelic doctor in the early 80's, I already had gotten the impression that the Duran Duran and Eurythmics on the radio were far more entertaining than those damn kids' songs they were playing in the kindergarten.  That's why I've already taken the liberty of brainwashing my daughter into listening to the Beatles 80% of the time (10% for the Beach Boys and my own music, and the other 10% for mommy's booty music).  Anyway, these fluorescent synth grooves, backed by that fluorescent cover sparked up those memories.  This EP features lazer-sharp electronic warbles programmed by the crystalline mind prism (my designation, not theirs), and some anthemic four-on-the-floor club vocals.

The first two tracks along with the finale would've been just the right tune to follow "Borderline" on the radio playing poolside in 1983.  Those are the tunes that got my attention.  "Tonight" and "Hi" take on later influences, with the former sounding a bit like 80's Kraftwerk doing dubstep, and the later sounding vaguely trip-hoppy.  Only "Goodbye" would have left the five-year-old doctor unhappy with its industrial vibe and electronic sandpaper vocals - and it is still my least favorite on here.

I guess synth pop isn't quite psychedelic, but I think it's the start of the line that eventually led me deep into the strange recesses of sound I obsess myself with these day.  Crashfaster is by no means full-on retro, but they leave me with a similar impression that I got from those acts of 30 years past.

Have a visit here:
https://crashfaster.bandcamp.com/album/superchroma
Posted by Dr. Schluss at 10:00 AM

In ' 83 the tunes getting my attention were from bands like Marillion, Venom and Deep Purple and the music I sought to avoid was the then new wave dominated top 40. Instead of Madonna or Human League I was all about the obvious choices like Sabbath and Priest as well as Zappa and Tull but also less well known acts like Anvil, Demon, The Rods and Cirith Ungol. A teacher taught me about acts like Tangerine Dream and Ash Ra Tempel and off I was on a musical voyage which is truly as exciting now as it was as a kid in the late 70s and early 80s. Discovering new music is still a thrill. Bands like Sula Bassana, Vibravoid, Wooden Shjips, Electric Moon, Yuri Gagarin and Carlton Melton make me glad to be alive in 2015. There are many others I didn't name and best of all are the bands I haven't been introduced to yet. I enjoy your blog and the spirit with which you exude in your writing. Keep on rockin!