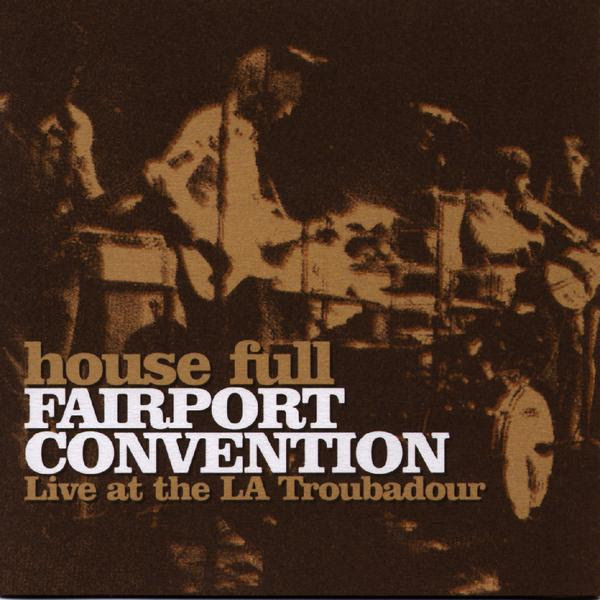 Well, they're pretty straight up folk rock by this point, but we did the last one so let's do this.  The angelic-voiced Sandy Denny left just before Fairpoint Convention's "Full House" album, but they retained their classic status until guitarist Richard Thompson left a year or so later.  Apparently Denny hated flying, so this window of time gave the band a chance to tour properly while still in their prime.  This recording is smooth, if a touch muddy (as opposed to Heyday's crisp, but slightly warped sound) - it is in a echoey club.  You'll hear Richard Thompson debuting the signature Fender Stratocaster sting that he's been successfully pushing for over forty years now (although I must admit I slightly prefer his 60's P90-driven Les Paul crunch), and Dave Swarbrick's fiddle is nicely front and center.  You'll miss Denny's (and Ian Matthews) vocals if you think about it, but Thompson and Swarbrick are still pretty classic British folk rock vocalists in their own right.

"The Lark in the Morning Medley" and "Jenny's Chickens" are very folky instrumentals that have every right to be cheesy, but the fire under the collective ass of the Convention pushes it into the realm of amazing instead.  Then "Sloth" develops into a twelve minute jam out that give the frontline instrumentalist to absolutely explode your minds.  It's a little odd to hear Thompson belting out "Matty Groves."  We'll get back to my earlier statement, though, that you'll only miss Sandy Denny if you really think about it.

This is not quite as essential as the Heyday set, but it's another one whose existence eluded my until my trip to the Ueda Departo last week.  While Heyday lives up to its title, this one displays the fully focused instrumental firepower that the Convention possessed at their best.

Never heard this one b4. Thx Dr Schluss!