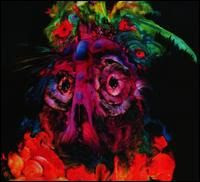 The band rides on the psychedelic side of the metal highway.  Quest For Fire trades in symphonic psychedelic jam outs, but they're not afraid to crank up the amps when the need arises.  The sound of this album gives us a grungy garage glow with the tube amps shining a warm brown; it's like a hazy recollection of classic rock informed by the indie rock buzz of prime Dinosaur Jr. (we're going to give that band's prime a nod both toward their 80's SST heyday as well as their recent albums with the return of prodigal son Lou Barlow).  This album probably won't rocket towards your top 10, but it's got a nice lived-in feel that may very well keep you hitting the repeat button.

There are plenty of highlights lurking around on this EP, but the opener "The Greatest Hits By God" is the most sublime aural hit.  With a plaintive violin suggesting a hint of prog rock, the band churns on slathering multicoloured paint onto a black canvas.  "Strange Vacation" puts on a pair of Beatle-boots, but planting the soles firmly in the 1967 London club underground, while "In the Place of a Storm" blasts the hinges of of a well-worn garage door.   Meanwhile, "Psychic Seasons" takes a cosmic Americana tilt into strangely wavering purple waves of grain.  "Seasons of Light" takes a loping beat and plunges it into some full tilt rock and roll noisemaking.  It almost reaches the epic, but the true source of that signifier is still best experienced on the first track.

I've had several bouts returning back to these tunes since their release in 2010.  Although they may not be the best at what they do, the great convergence of warm production, well-written tunes, and true blue psychedelic hard rock hit a definitive sweet spot.  This is the sound of the desert slowly being overcome by go-go dancing fluorescent paint and fractal flora.  I'm in for their weird primordial ceremony to bring on the fire should it occur.

Their 2009 self titled debut is pretty awesome, as well.