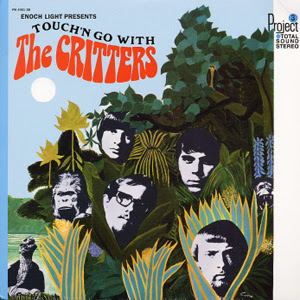 The cheese of AM pop is present here, but in a wonderfully palatable form.  While the slab of vinyl didn't quite have the power to break into the transcendental that the Millennium or the Beach Boys could, the Critters had the dander to make everything groovy, and couldn't have come out of anywhere but 1967.  Dig it.
Posted by Dr. Schluss at 12:39 AM

Great blog but please remove this post as Now Sounds has recently reissued the album.

You should at least add an Amazon link on this one, so people could get it legitimately. The Now Sounds reissue disc is awesome. It includes both the Critters Project 4 label albums. They do great work in the pop reissue field.

i think it is frustrating and sad, that you put your heart and positive energy into this blog, only to get redirected by the whim of the artist? agent? amazon? other? to redirect search for the music elsewhere. it would be a link tracking nightmare. for instance, the comment above asks you to redirect to now sounds, but when i go there to find the music, the page redirects to cherry red main page which has no reference to the music in question, but lists nowsounds as a possible affiliate, but where does one find what one was initially looking for as you initially commented on it? i think the proprietary corporate internet has to die so that organic business can exist. like bandcamp, buy direct from artist. now there's a real time solution. and it's affordable not 25£ british which is 2 1/2 times the price of music in the rest of the world. all that, just to hear what the music is like... duh