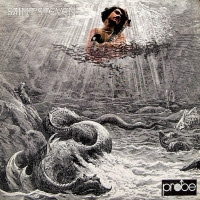 Folks, choose your recording venue wisely.  I hate to come down so hard on the technical, but I"m guessing that the engineer was probably better equipped to record a gospel-singing family or something, and the "Saint" tag sort of threw him off.  This is a pretty groovy, if slightly hamfisted, mini concept album going on here.  Those of you with a more forgiving ear can hold on tight to the psych-rockin'.
Posted by Dr. Schluss at 11:36 AM

this blog is pure gold! man this kind of stuff is what make people like you so valuable