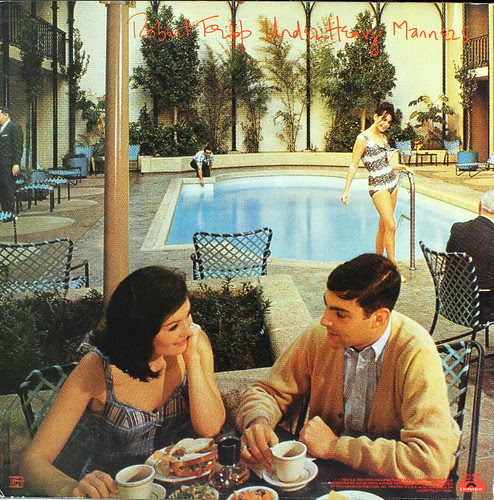 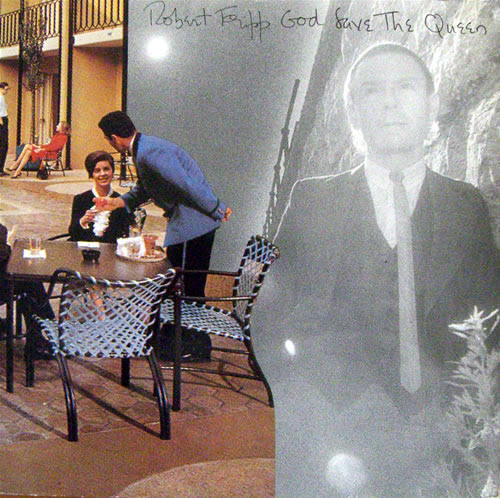 OHMYGODTHISALBUMHASTWOCOVERSIDONTKNOWWHATTODO!!!
Quality: 5 out of 5
Trip-O-Meter: 5 out of 5
I have a pretty weird perception of Robert Fripp. He most certainly ranks among my favorite guitarists, but I'm not into that much of his main project King Crimson, and even his solo albums tend to sound a bit spotty to me ("Exposure, " anyone?). The gold to my ears is when he's working with Eno, or Bowie, or the Talking Heads (whose leader David Byrne also appears here for one shining track). So, I find this amazing album to be Fripp's shining solo journey into transcendental sound. Much of the album revolves around Fripp's meditative, ambient Frippertronic guitar sound, but there are a couple of serious art rock ringers rearing their heads at the end.
Side one of the LP is completely devoted to deep space guitar explorations. You'll never remember what "Red Two Scorer," "God Save the Queen," or "1983" sound like, but you may very well dig the sonic journey anyhoo. It's of note that each track comes across a bit more menacing than the one before it.
Now I heard a Talking Heads song on the radio about ten years ago that completely blew my young, eggshell mind. I went on a hunt to find the damn thing, and even bought the Talking Heads horrific "Naked" album, hoping it would be there. Turns out that it's not actually a Talking Heads track, and in fact appears on this album as "Under Heavy Manners." David Byrne guest in a long, strange rant about '-isms' and jizm. His band was originally called the Artistics, which many people tweaked to the Autistics, due to Byrne's freaky stage manner. Anyway, this track has me thinking that maybe that name wasn't a joke. Closing out the set is "The Zero of the Signified," which hits us up with seven minutes of afro-beat groovin', followed by another wall of ambient Frippertronics.
I think this album has been greatly obscured by the dust storms of time, but it really does present Robert Fripp at his best, with a fine chaser of David Byrne at his most freaky-spastic. Give it a listen.
Posted by Dr. Schluss at 11:21 AM

the god save the queen side is one of my all time faves - now i can have digital as well as vinyl. Thanks!

He was actually on the G3 tour backing up vai.

yeah, this is a good one, unheralded.. dusthammer

quite a choice morsel here

For more pure Frippertronics check out Let the Power Fall, which is fab.

I used to think David Thomas of Pere Ubu was the most mentally unbalanced of the "new wave" singers during that era. After hearing David Byrne on this album, now I'm not so sure.

God save Dr Shluss
Thank for this amazing music.

Thanks a lot for this one! Haven't heard this in ages since my records are all in storage. Robert Fripp is one of the all time greats of the guitar.