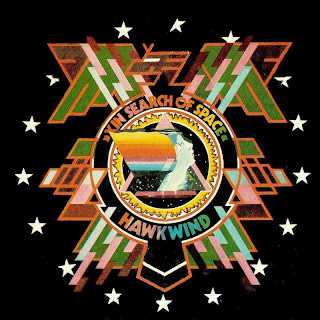 Hawkwind has a giant, intimidating discography, and I have to admit that I haven't delved too deeply into it. I do know that I dig this album quite well. The live "Space Ritual" typically gets the love, but I find the sound on that one a little muddy, and Lemmy's bass seems to be out of tune for most of the album (not that this detracts from the awesomeness of Lemmy). I dig the slightly more focused, and better recorded intergalactic musings found here. The band has no problem entering a full on psychedelic heavy metal groove, and there are plenty of wild early synth sounds to keep my attention.

The album opens with the punk rock stomp of "You Shouldn't Do That." It's an absolutely essential track with plenty of wah-wah acid guitar, wild saxophone madness, and some electronic tones to penetrate into the deepest recesses of your brain. This is all capped with some great breathless vocal 'harmonies' making the song's title a mantra. Yeah, it's 16 minutes long, but that may very well be too short. The other classic on this disc is "Master of the Universe," which I suppose is the band trying to usurp Black Sabbath's claim of the title "Master of Reality." I don't know if they quite take down Ozzy, but the psychedelic sludge is a pretty even match and Tomy Iommi probably would have killed all of Hawkwind to steal the guitar riff if he had had the chance (dammit, I need to write about heavy metal more often). "We Took the Wrong Step Years Ago" is a meditation on if the band had focused on progressiv bluegrass I suppose, while "Adjust Me" is a wandering experiment that doesn't quite pay off.

At this point Hawkwind was sitting a point right in the middle of progressive rock, heavy metal, and psychedelia, and it was a pretty groovy place to be. I don't know if this is really Hawkwind's best effort, but it is the one that I find myself listening to over and over again.
Posted by Dr. Schluss at 10:43 AM

Here is located one of the essential godheads of European Space Rock. It remains the blueprint almost forty ... well I guess it is forty years later now.

Saw them live recently, the old boys can put on a show.

Anything from their discography is essential, be it the late 60s, from the 70s, 80s, 90s or 00s, they still know how to blow your mind, that includes the new album from 2010, the track Green Machine is immense!!

Thank you for the discovering. What an I*N*C*R*E*D*I*B*L*E album!