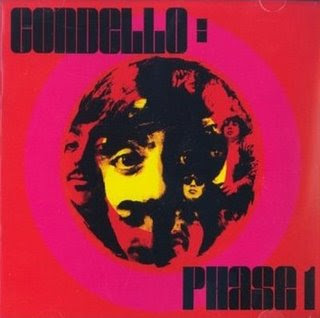 I feel like I'm being a little lazy when my reviews include this many direct comparisons to other artsts, but Phase One is truthfully a somewhat derivative affair. Fortunately, the band made up for a lack of originality with a few really great songs. You may not need this entire album, but you will likely find three or four songs that you can't live without.
Posted by Dr. Schluss at 1:21 AM

Condello was part of a Phoenix children's show called Wallace and Ladmo from the late 60s to the mid '70s - wrote the music. I believe he committed suicide.

He did commit suicide, toward the end of the 90's. He had just gone on anti-depressants. His shrink took a lovely vacation and should have waited to start his prescription until after the lovely vacation was over.

Mike was a beautiful one.

Are you saying it sounds like something that would have been on Ogden's Nut Gone Flake if that album were recorded by the Pretty Things? Or did you just make a mistake in attributing The Small Faces masterpiece to the wrong band?

I have a bad habit of mixing up the Pretty Things and the Small Faces for some reason. I'll get that corrected.

If you remember Mike Condello, please consider making a Kickstarter pledge to get his ELTON DUCK tracks released in a collector’s edition CD.

Dr. Schluss completely misses the point. Mike Condello was a big star in Phoenix in the late 60's. His music was a satire of the Beatles of the Sgt. Pepper era. Mike sold LOTS of records in Phoenix and was the musical director of a kids t.v. show that ran dailey for years.

I like this album far more than you do. But it's refreshing to hear other listener's opinions. Thank you.