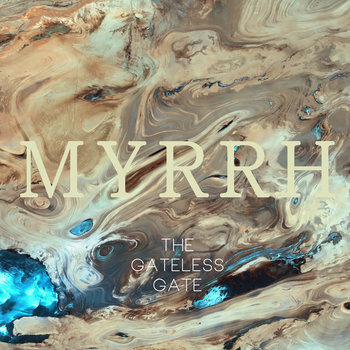 I get a lot of submissions, but a few artists really do strike my fancy.  I've got my ears open for the Gateless Gate, who attempt to bowstep their way towards transcendence.  This EP goes for a very subdued version of the M83 soundtrack-mode bombast.  I don't dig it quite as much as the Tibetian shadow mask, but it sounds pretty good with it's wafting synthetic clouds.

We've got a very unified bit of music here, with each track melding into its successor.  The pivot is a cover of the Church's Myrrh, which I believe is the first attempt at lyrical incantations by the groop.  It's good, but sometimes the bookends gleam more brightly.  "Nightmare Decent Into Jericho City" set upon us a strange Middle Eastern vibe, blasting its sinuous grooves into an as yet unrevealed Michael Mann flick.  At the end of the sequence, "Their Hollow Laughter, the Pain in Their Eyes" opens up the full-scale full moon L.A. cityscape - sound of the fog rising into a slowly disintegrating core.

I'm a rooter for the Gateless Gate.  Their debut drew my allegiance and I want to hear where they go next.  This EP is but another interesting detour, but I applaud that sort of quest. I think this set is for the initiated, but you'll get a glimpse of pure music shamanism even if you back into this unprepared.  Enter the gate this way: