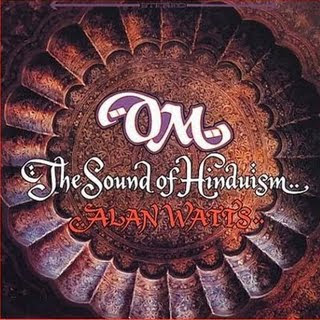 On this album, spiritual scholar Alan Watts' limits his focus on Eastern religions to the sphere on Hinduism. To be perfectly honest, there's not a whole lot of music of note here. Basically the album features a drone in the right channel, Watts' spoken word in the left, and some percussion taking up the entire sound field here and there. I'm not sure how accurate or not Watts' thoughts about Hinduism are (I'm assuming that he is not full of poo), but these recordings are perfect to put your mind in a meditational state.

The first track, "Om," consists of Watts' treatise on the basic tenants of Hinduism. The man definitely has a fine way with words, and I'd say the artistic/poetic component here is several notches higher than your typical spoken word performance. "Readings From Hindu Scriptures" is pretty self-explanatory, but once again Watts' spoken word stands out. Sandwiched in between is an instrumental track where we get a touch of sitar melody. It's not up to the standards of Ravi Shankar or anything, but it serves its purpose in allowing the listener to zone out.

I suppose that this is one of those albums that I feel becomes more than the sum of its parts. There is some nice, if a bit light, Indian instrumentation for those of you that dig that, and I feel that Watts' presence is of significant note. It's a fine way to turn off your mind, relax, and float downstream with.
Posted by Dr. Schluss at 2:20 AM 10 comments: 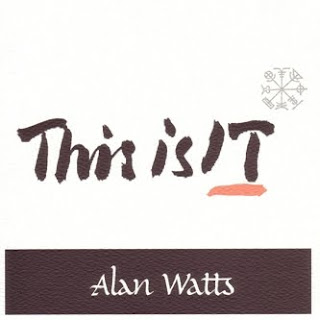 Alan Watts was a British proponent of Eastern religions, and not so much of a musician. He nevertheless managed to release a few albums of tripped out instrumentals and spoken word to try and increase awareness of Eastern traditions. This one is a pretty abstract affair of throat singing, chants, drones, and percussion. Only with Watts spaced out spoken words does the music peak out of the transcendental aether. Like some of Sun Ra's work from the early 60's, this music is true psychedelia years before popular music began to explore similar avenues. Unfortunately, some of this album also shares the questionable recording quality of some of Sun Ra's recordings. Still, it's perfectly listenable and a fine soundtrack for your backroom opium den.

The best place to start with this album is probably with the shorter tracks featuring spoken word. "Onion Chant" and "Fingernail Poem" both feature Watts' Eastern-tinged poetry. The former matches Watts with some percussion and fierce chanting while the latter includes some abstract jazz piano playing. Once you've acclimatized, take a plunge into the long-form freak-outs of the last three tracks. I've got a soft spot for "Metamatic Ritual," but the creepy laughing in "Umdagumsubudu" and speaking in tongues in "The End" is worth hearing if you're up for wild chanting. The end of "The End" kind of frightens me.

Although this music doesn't really fit into the realm of rock, the sounds are about as psychedelic as you're going to find. The crazed percussion definitely makes me thing of some of the stuff that Sun Ra was doing around the same time, but the manic chants, Eastern instrumentation, and Watts' poetry help to distinguish this as a wholly unique album. 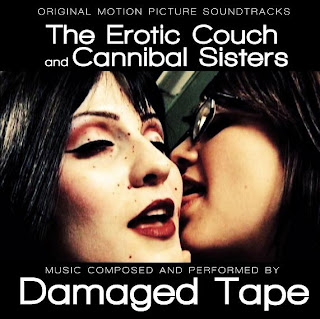 I occasionally do soundtracks for independent films makers, most often for my childhood friend Andrew Shearer who writes, directs, and produces films under the Gonzoriffic Films label. These two are probably the ones that I put the most work into (as opposed to Andrew simply using tracks from my albums). I'll write a bit about them separately.

"The Erotic Couch" is Andrew's most recent directoral effort. The idea was to model it after a sexploitation movie from the late 60's. There is no actual nipple footage in the film, distinguishing it from p*rn, but it is of course a sexy affair. Andrew's instructions for me were to make some pre-disco exploitation music. That said, "The Ravishing Recliner" and "The Lecherous Love Seat" have some serious dub leanings, and "The F**kin' Chair" and "Chair F**k" are based off of "Call of the Cosmic Tribe" from the Glaze of Cathexis disc, "The Golden Konbanwa" (although "Chair F**k" no longer contains any of the original track). I'll also note that "The Lecherous Love Seat" is a 'work-in-progress' preview of an upcoming Damaged Tape LP. You'll notice that I've added Moog noise to all of the tracks to approximate a crackly vinyl sound. This was done to match the intentional film defects of the movie itself.

"Cannibal Sisters" is loosely based on a criminal case in Atlanta from about 15 years ago. Since the movie is mostly based in an urban setting (er..., apartment), I tried to contrast it with as many tribal sorts of rhythms as I could. "Boneyard," which also appears on Damaged Tape's "Ship of Lights," was recorded earlier and served as my basic template for the soundtrack along with 70's Italian horror soundtracks (any Goblin fans out there?). I paid close attention to the drum programming, and I felt like the production of this soundtrack significantly improved my drum programming abilities.

To delve deeper into the world of Gonzoriffic, head on over to http://www.gonzoriffic.com. I'm sure Andrew has some DVDs he can set you up with. Check out "Psychovixens" for a glimpse of my own terrible acting as Oscar (the soundtrack for that one is on Damaged Tape's "Electric Ocean"). As a side note, I don't rate my own music, but most of this is probably not very high on the Trip-O-Meter. I think I back off on the psychedelia a bit when soundtracking films. 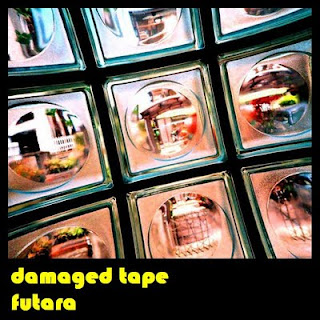 This music dates back to my first stint in Japan. You could see the back of the Futara Shrine in the city of Utsunomiya from my apartment, hence the name of this collection. This music was recorded from January to May 2005, which is the same period of time that I recorded the Glaze of Cathexis "Tokyo Rainbow Bridge" tracks. Although I was still at the beginning of the learning curve of laptop recording, and I only had a MicroKorg and Reason to work with, I'm still pretty happy with these tracks. For a while I had considered rerecording "Jakarta" and "The Flower of Darkness," but I doubt I'll get to that anytime soon, so the originals are here. You'll note that "Before the Flood" has a sample of Neville Chamberlain ranting about public heath. Being that I recorded it in 2005, this track is not meant as any commentary on the U.S. health care debate - I used the sample as it seemed absurd that this was Chamberlain's priority in 1939 as the Nazis were about to provoke World War II. "Chonk" and "Kung Fu Glue" reflect my bad habit of making up stupid file names so I can save my mixes, and then never renaming them (I also have songs like "Nork" and "Floob" hanging out on my hard drive). Musically, the band Air was certainly still at the forefront of my influences, as were Moby's more ambient tracks from the 1990's. I consider 'side two' of the album to have some sort of concept, although you'll have to work that one out on your own (although I did read Simon Winchester's book about Krakatoa while making the album). Enjoy and feel free to repost elsewhere. 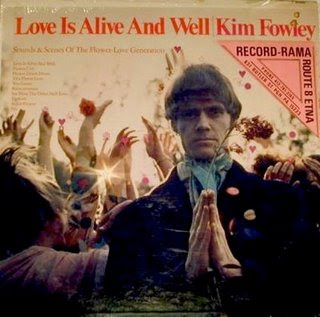 I've sometimes heard Kim Fowley referred to as a psychedelic huckster, grasping at straws to churn out freakish records of bubblegum psych. This record will do nothing to dissuade that viewpoint, but I kind of like it anyway. There is a distinct cheezy charm as Fowley never quite hits the vocal mark even though he seems to be trying really hard, and the production pretty much throws out every psychedelic pop cliche that it can. It's very much a sell-out of its era, though, and this entertains me at least.

There is admittedly not a whole lot of originality here, but there is plenty of a fabricated Summer of Love sound. "Flower City" is an almost cringeworthy re-appropriation of "Ode to Joy," but it does feature a groovy beat and a short rave-up. "This Planet Love" manages to rip off "Who Do You Love?,' complete with a rabid Bo Diddley beat, and "Reincarnation" nicks the "Pushin' Too Hard" beat, which the Seeds themselves admittedly reused themselves about 57 times. "Super Flower" is a completely useless 'interview' section. You'd think that on a 21 minute album they would be able to avoid that sort of track. My favorite here is "War Game," which is a completely insane bit of orchestrated spoken word which would fit nicely on a 60's Zappa album. I will say that "See How the Other Half Love" is a fine psych-pop rocker that doesn't seem to have a specific antecedent (not that it brings anything particularly new to the table).

This isn't a good album, but it has a lot of charm. It's sort of like listening to a distorted, demented version of 1967 pop radio. If you aren't already familiar with cult stars like the Chocolate Watchband or the aforementioned Seeds, by all means explore that first. This odd Kim Fowley album is really just a little sugar for the already initiated. Half the fun is figuring out all of the things he's sonically stealing from elsewhere.
Posted by Dr. Schluss at 12:59 AM 13 comments: 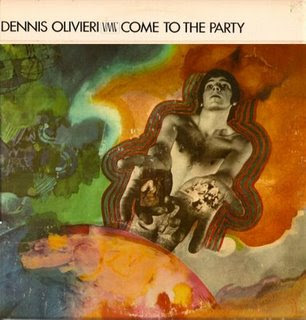 
It certainly is an odd party that Dennis Olivieri has invited us to. There are components of bad trip lyrics, jazz rock, blue eyed soul, and a touch of psych rock wafting around the grooves of this record. Olivieri's voice does tend to be somewhat warbling, but he keeps it under control just enough that it usually works in a 4am bar sort of way. This doesn't always add up to musical nirvana, but there are a few winners lurking about as well as a couple tunes that will leave your jaw hanging bemusedly.

The first couple tracks serve up some jazz rockers that chug along nicely. Although "Opportunity" has a jaunty, jazzy beat, Olivieri seems to be going on about something significantly more depressing. After a few minimalist tracks like "Mama's Funeral Song" and "Walk Rite Out," "I Cry in the Morning" gives us an eerie psych ballad. It's tremeloed organ is enticing, although the production does seem oddly muffled in this one. Olivieri seems to be trying to channel Astral Weeks period Van Morrison as much as he can on "Lady Fair" and the title track, while he comes across as drunker-than-hell on the closing "Yesterday Wan Nuthin' Like Today." I guess it's supposed to close the album in a similar manner to the Stones "Something Happened to Me Yesterday" on Between the Buttons, but Mr. Olivieri doesn't really have that level of songwriting chops.

This isn't the most wacked out thing that we've come across at the Psychedelic Garage, but there are a few oddball moments to be found. Dennis Olivieri's disc can be quite amusing should you have an affinity for jazz-rock and don't mind a few copied Van Morrison moves. That said, you won't quite get the psychedelic freak out by way of Kenneth Anger that the cover suggests.
Posted by Dr. Schluss at 11:10 PM 8 comments: