Glaze of Cathexis - 2011 - I Often Dream of the Apocalypse 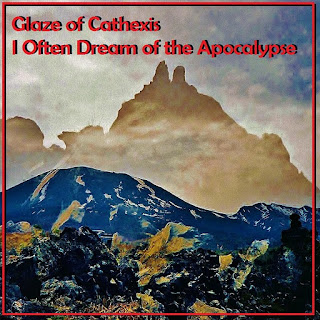 The title here is a true fact, although my dreams do tend to be like tripped out blockbuster films rather than nightmares, so I pretty much welcome them. The seed for this album started as I was scoring tracks for the 60's styled exploitation film, "The Erotik Castle of Dr. Humpinstein." I was going for surfin', bikin', and all around 60's crunch. I really got going when I had some work days scrapped in the aftermath of the March 11th Japan quake, and kept on recording through the aftershocks. Obviously, some of the palpable paranoia from the prospect of getting irradiated by Fukushima is quite present as well. I remember being told by my boss to wear a mask outside during the radiation spike of March 15th. Not that I was going for a depressing vibe - I want you to rock n' roll to this music. Like the last Glaze of Cathexis album, I'm presenting this in both a rockin' crunchy mono mix, and a 60's styled psychedelic stereo mix with the drum kit shoved in the left channel. I also need to give some props to Gonzoriffic Films' Andrew Shearer, who was groovy enough to serve as the drummer, and pounded away to these tunes. Here are some song notes for your perusal:

1. I Often Dream of the Apocalypse (2:28) – I had already given this album the name, but I thought a title track would be fun. This was originally recorded for Andrew Shearer’s film ‘The Erotik Castle of Dr. Humpinstein’ as a dance number called ‘The F@&k!!!’ For the album track, I felt compelled to try and match the insanity of the original track, so I did my best unhinged Roky Erikson impression on the vocals.
2. Coconut Sunstroke (1:35) – I had a few drinks and tried to record this as a sort of 60’s Marc Bolan acoustic guitar and bongos thing. It was a little short for a real tune, so I decided to use it as an acoustic interlude. It does have a vocal melody that I never bothered recording, though.
3. Nuclear Sundown (3:06) – I came up with this tune while strolling into UGA’s Russell Hall during my freshman year of university back in 1997. For this rendition, I revised the lyrics to reflect the time after Fukushima went wild and tried to give it a groovy Byrds/Velvet Underground approach. Previously I’d tried to make it a punk or soul number, but I think this one fits best.
4. Cold Fusion (3:02) – And how to solve our nuclear problems? Maybe by inventing cold fusion. This started as a surf number for ‘Humpinstein,’ but for the album version I found a list of radioactive elements and sang all the ones that ended with ‘-ium.’ Certainly it’s the best track to follow ‘Nuclear Sundown.’
5. Drifting Concepts (3:51) – I recorded the original instrumental groove about 12 years ago and made a version with lyrics around 2007 (that one can be heard on one of the compilations at the 'Homemade Lo-Fi Psyche' blog). That recording sounded like strangled butt, though, so I’m glad that I made this re-recording.
6. Nothin’ll Ever Let You Down (2:26) – This was another instrumental for ‘Humpinstein,’ but I threw in some lyrics for this version, even if they get entertainingly pretentious. I started recording around the time of the March 11th earthquake, and you’ll hear a flaw in the recording at 1:05 that was the result of one of the aftershocks. Instead of getting under a table or leaving the building as a sane person would, I just kept recording as the room was shaking around me.
7. Technicolour Clouds (4:05) – I recorded this in Atlanta during the ‘Golden Konbanwa’ recording sessions. I recently rediscovered it on my hard drive. The track was a little more electronic and I intended it to be a Damaged Tape track, but I took out some synth parts and stuck it on this album. The tune is meant to be a bit of a palette cleanser. I really dug how ‘Treefingers’ on Radiohead’s ‘Kid A’ sort of served that purpose, and that’s what I want this to be.
8. Explosions in the Sky (2:09) – This was the title track for ‘Humpinstein,’ but a retrofitted it and it kickstarted the apocalyptic vibe, along with the apocalyptic vibes that were all around back in March. I let my Southern accent rip a bit on the vocals, and the lyrics were meant to have a bit of a ‘Major Tom’ groove, with an astronaut watching the world end from a space station. Sonically, I was going for the theme song to the ultra-obscure psychploitation film ‘Psyched by the 4-D Witch,’
9. The World is a Circle (4:03) – This is a Hal David/Burt Bacharach tune from the horribly cheesy ‘Lost Horizon’ musical from the early 70’s. You can find the original on youtube, but you’ll probably regret it. For my take, I was trying to go for John Lennon stealing Kurt Cobain’s amphetamines and recording showtunes.
10. Stream Moves On (3:52) – I wrote this for ‘Underground Sound,’ but didn’t get around to recording it until this year. It ended up a little more acoustic than I originally planned, but I through in some Moog parts to balance that out. Vocally I’m going for the lovechild of Roger McGuinn and Ira Kaplan (from Yo La Tengo).
11. The World Cannot End (3:31) – I also wrote this for ‘Underground Sound,’ and recorded the drums and rhythm guitar during those sessions. I think it came out a little like R.E.M. and Bruce Springsteen in a juke joint
12. Run Again (2:43) – This is a country ditty that I originally wrote and recorded in 2001. I used to try to sing it like Johnny Cash, but I found it was much better to go for a Roy Orbison approach.

If you are groovy enough to give this a listen, I'd love to hear your comments.
Posted by Dr. Schluss at 12:51 AM

The approximation of the past style is spot on (with some improvements given your time perspective).

Your handling of the song-writing & music in general is finestkind.I hear plenty of good records that aren't as good as yours is.

An added bonus for me was your comments on each track.Most interesting,especially while the pertinent track was playing.

The only thing I thought could be better would be achieved with a large cash infusion & lots of studio access.

In my opinion,you're doing work totally worthy of being label-released & bought.

Thanks for the listen.
Hope you thrive.

This is great music. It reminds me of college days when apartment windows and doors were open in warm weather, and neighbors "lived with albums", playing them continuously for days. This is a very catchy, and very listenable selection of tunes, and I will be playing them a lot. I put in 1 to 2 hours of cooking many evenings, and "I Often Dream..." will definitely animate the process.

hey man I really dig your music. You recorded it in Japan, right? Funny thing, one of the first things I felt when listening to your songs was of actually hearing 60's japanese surf covers, like yuya uchida or the three funkys. I guess the production is very much the same, which gives a past-like feel on the guitars. On the other hand the vocals are very contemporary, and I got into that as well.
Keep it up, man.

Very groovy to hear the comments so far. Paulo, I sort of semi-reacted to your comment by posting the Akiko Nakamura album. I didn't hear it until after recording this album, but catching stuff like that while living in Japan very well may have been an unconscious influence.

Keep on Keepin' on!

Thanks, Gill! I'm not sure I could've rated the album so highly myself!

At the begining I was kind of lazy, but It's worth!

Wonderful! I didn't know about this japanese band. Really Awesome!
The end of the world always reminds me Dreams, from Akira Kurosawa. I thought of this when the radiation leak was noticed.

I want to tell you about a new garage rock band from Italy, called Giöbia. Really good. Check them out: http://giobia.bandcamp.com/

Bought some small laptop speakers today and got to listening to "I dream...." again and have been all the way from a full stereo iteration, and back through mono; both have their own character and sound GREAT (speaking of your music, not the speakers). Occurs to me that this album is a "brain onsen" that I can relax in and enjoy indefinitely! I really can't disqualify a single song from potential favorites, so congratulations again on a first-rate collection. With more than a touch of pride I am dragging a link over to FB just in case some friends have still missed out on this.

Great job on this, keep up the good work with your music and your blog