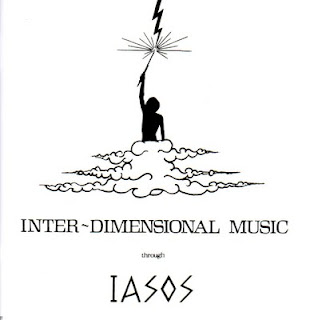 Here's an album that I know almost nothing about, but have found myself listening to incessantly. I imagined that Iasos was some kind of new age commune. If you visited their home, I thought you'd find them doing yoga while wearing tight pastel yellow tights and tank tops and frizzy hair, after which then insist that you join them for a trip to the wood-paneled vegetarian supermarket. I didn't want to spend time with them, but I was infatuated with their sounds. Then I look at the All Music Guide, and it said that Iasos is actually one guy who is considered one of the first artists of the new age musical genre. It kind of deflated my vision behind this album, but fortunately the music is still great. Yes, it is new age, but of the 70's variety with analog synthesizers and hazy, groovy taped production (as opposed to the Great Digital Recording Terror of the 80's). Yeah, it probably would have played in that wood-paneled health food store in the 70's, but you would have enjoyed the music and maybe you could have found that awesome Panda cherry licorice somewhere in the aisles of the store.

This is another one of those albums that really works as a continuous whole. It loses quite a bit of its vibe if you isolate the track. That said, when I'm particularly enamoured with a tune and take a look a the track listing, I've found that it's usually "Formentera Sunset Clouds," "Rainbow Canyon," "Angel Play," or the closing "Maha Splendor." The first half of the album tends to be the more tuneful half. Once Iasos 'gets you in the mood' so to speak, the music becomes far more ambient. This does end up making the second half a little more murky sounding (although "Angel Play" shines quite well) and "The Bubble Massage" ends up being just five minutes of percolating bubble sounds, which I could achieve on my own by sticking my head into a jacuzzi.

Really, though, this album is quite a trip and a very groovy musical time capsule of its era. It's on a slightly different plain of existence than Berlin schoolers like Tangerine Dream or Klaus Schultze, but these sound would actually complement those artists very well. So light your opium scented candles, recite a few verses you've memorized from the Bhagavad Gita, jump into your giant round hot tub with several big-haired sexually liberated women (or hairy chested, medallion-wearing men), and give this a play.
Posted by Dr. Schluss at 10:47 AM

Thanks. I can't wait to hear this. Wikipedia says. "The psychology department at Plymouth State College rated his Angelic Music album as being closest to the music heard by people who have had Near Death Experiences." Well, who knows, but still...

Excited to hear this one. Thanks a bunch.

Please for Christ sake help this poor boy from Haiti

thanks for this sounds good

If you like this, you absolutely HAVE to seek out the album Jeweled Space, also by Iasos. It's divine...

Another victim of the deranged Mediafire scourbots no doubt that seem to be deleting things left right and centre! And to think, I like many others championed MF for years.

If you are in the reposting mood, it would be great if you could y'know...repost this.

While I was searching for this, I came across another Iasos album from 1978 here:

This album is excellent. Avoid reading his metaphysical musings, though... the music is too good to dismiss to be eclipsed by the fluffy rainbow-unicorns.