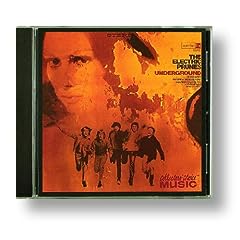 The Electric Prunes second long player is a significant improvement over their first. It's lacking the instant punch of their first disc's amazing singles, but makes up for that with consistency. Here the band seems much more in control of their fate and firmly in the driver's seat. There are still some stylistic excursions, and they do not always work, but they don't jettison the Prunes' signature heavy reverb and tremelo sound as several tracks do on the first album. The band also takes on much more of a songwriting presence on Underground. Scribes Mantz and Tucker still contribute with three songs, but they don't have the massive presence that they did before.

Underground is bookended with it's best tracks. "The Great Banana Hoax," which was written by singer James Lowe and bassist Mark Tulin, starts the album off with a psychedelic tour-de-force. The band follows an awesome tom drum driven groove through several eerie and pleasingly disjointed sections of music. Although the strange structure wouldn't have earmarked this one as a single, for those willing to follow "The Great Banana Hoax" is just as rewarding as the first album's classic singles. More immediate is the closing track "A Long Day's Flight." This relatively simple garage rocker is performed with maximum impact and should have been the breakthrough single from the album (I don't believe it was ever released as a single).

In between these psychedelic masterpieces is a pretty good, if not great, album. The band seems to function best when they're riding a bubbling groove as on "The Great Banana Hoax." They manage to maintain a chill, almost San Francisco rock type of groove for five minutes on Tucker and Mantz's "I." "Children Of Rain" is a cool mid-tempo psych track and the band logs in another top flight rocker with the Lowe and Tulin written "Hideaway."

There are still a few questionable style changes on somewhat cheesy "Antique Doll" and the excursion into sunshine pop on the Goffin/King composition "I Happen To Love You." Fortunately this is not at the expense of the Prunes' trademarks, and thus are far more successful than certain tracks on the debut album.

Although lacking their best known songs, Underground is the most accurate representation of the Electric Prunes released in the 1960's, and more than deserves the ear of discerning psych rock fans.

The recent reissue includes a few non-album singles, plus a few mono mixes of the proper album tracks. Both the new remastering and the liner notes are superior and marginalize the previous CD releases of the album.

Buy Me:
Too Much To Dream: The Original Group Recordings
Posted by Dr. Schluss at 10:35 PM